Samia Suluhu’s rise as the President of Tanzania has intensified the violent policies of her predecessor John Magufuli, who was regarded as one of the worst dictators of modern times.

The Tanzanian government‘s way of handling Freeman Mbowe’s case is the worst example of crisis management, driving questions about the impartiality of Samia’s administration.

She has not only taken over the presidential branch but is also impacting the judiciary as much as possible.

Despite the fact that Judge Elinaza Luvanda has stepped down from the case, he did it to buy some time for the government to craft an even stronger charge sheet against Mbowe so that the Chadema party leader can be tried even more strictly.

Terrorism case against Freeman Mbowe is a worst example of Presidential influence on judiciary in Tanzania. Samia Suluhu’s bid to curb the opposition voices can become fatal for democracy in Tanzania.

Tanzania’s Judiciary Dirty Ambitions Unveiled: President is Poking Her Nose in the Judiciary

The ambitions of the top Tanzanian leadership became suspect when Freeman Mbowe was arrested under terrorism charges, principally for his demand for a new constitution.

These motives were confirmed when Tanzania’s high court rejected Mbowe’s plea that the high court’s branch had no jurisdiction to hear terrorism cases.

The corruption tribunal, or as it is known, the High Court’s Division of Corruption and Economic Sabotage’s efforts to bring the case to its own table by rejecting Freeman Mbowe’s appeal, depicts ill-intentioned judiciary behavior.

The high court branch wanted to hear the case so that it can announce the verdict of its own choice.

One of the distinctive traits of a tyrant is its occupation of the state institution by hook or by crook. This is what Samia Suluhu did. Her efforts to jail the opposition leader can be well gauged by Tanzania’s judiciary behavior.

Despite the fact that Judge Elinaza Luvanda has stepped down from the case, the government would appoint a like minded judge once again to prosecute political rivals.

Judge Elinaza Luvanda: A Man Who Was Raised by the Government to Prosecute Political Rivals

Despite the fact that Judge Elinaza Luvanda has stepped down from hearing the case, his appointment in the first place was extremely politically motivated, especially when reviewing his past record.

That Tanzania’s judiciary is politically driven is evident from the fact that this Luvanda is the strategic judge who is often used to prosecute, or rather, persecute political rivals.

When the judge first dismissed Mbowe’s request, people already started questioning his ambitions, wondering how did this judge was elevated to such an authoritative position.

Reviewing the historical events in which Judge Luvanda was featured portrays the political nature of the charges on Mbowe as well.

Before his rise to the national landscape, Luvanda was the secretary to the Acting Chief Judge, Ferdinand Wambari.

However, seeing his blind allegiance to unconstitutional orders, he won an appointment as a member of the Judiciary Management of Tanzania until President John Magufuli later appointed him as a Judge of the High Court.

John Magifuli’s recognition of his services was itself the admission that he is the mouthpiece of the government and not an impartial judge who can preserve the integrity of justice. He was involved in the following politically motivated cases in Tanzania.

Considering this past record of Judge Luvanda, it is easy to say that he was being raised as a man to slaughter political opponents and rivals of the ruling Chama Cha Mapinduzi (CCM) or, more specifically, John Magifuli and Samia Suluhu.

Judge Favoring the Government in Mbowe Case: A Shame for Tanzania’s Judicial Structure

This is a worrying state of affairs, as the judiciary is considered the noblest institution of any country and an instrument of justice. But executive influence has diluted the authority of the judges, often using the judges to pursue their political rivals.

One of the bones of contention between both parties, in this case, was the terrorism-related offenses for which Freeman Mbowe is being tried.

Mbowe’s legal team tried to convince the judge that the indictment had legal loopholes, for which the government’s team tried to defend itself.

Despite the fact that Judge Luvanda admitted that the indictment is indeed a faulty piece, he did not drop the case, which was his first responsibility legally.

Had there been an impartial judge, he would have dropped the case at that point. But as this was the case specifically assigned to Luvanda for punishing the opposition, the judge asked the government team to fix the offenses and come back with the revised case.

The government never demanded the judge to allow more time to amend the document, but the judge assigned it to them himself, which clearly demonstrates the political inclination of Judge Luvanda.

The general rule of thumb in the judicial setups is that judges are non-biased, and they make their decisions as per the available charge sheet. But in this case, the judge gave the prosecutor’s side more time to strengthen their case against Freeman Mbowe and others.

The case against Freeman Mbowe should have been dropped ideally once the judge found that indictment was a faulty piece. But as judge goves more time to the government to change the charges, it depicts that the government and judiciary has teamed up to silence opposition.

Elinaza Luvanda Stepping Down: Not for Justice but to Collect Sympathy
Advertisement

This was the time when Freeman Mbowe was convinced that if this person remained a judge for the rest of the case, his defeat in court would be absolutely certain.

Mbowe then demanded the change of the judge, following which Judge Luvanda stepped down by recusing himself. Although the case had been adjourned until the appointment of the next judge, the damage has been done by Judge Lavanda.

He has already made the statement that the judiciary stands by the government and its ambitions, and it does not matter how unconstitutional they are.

Judge Luvanada saw all of this coming, and he knew his controversial history very well. That is why he stepped down to get a sympathy vote from Tanzania’s citizens.

This could be another act by the Samia Suluhu government; that they demanded the judge step down to portray the notion that the government does not intend to disturb the judicial process.

Had the decision come from the pen of Luvanda, everybody would have been questioning the impartiality of that decision. So President Samia Suluhu’s tactic to sideline the judge depicts that she wants to mend her reputation among average Tanzanians.

This way, she can now manipulate the new judge to take a decision in her favor and label that this decision came from an impartial person and not the controversial Luvanda.

“What I am doing is to promote our country Tanzania internationally. We are going to film attraction sites.”

Samia Suluhu is focusing on marketing Tanzania to the world to attract tourists to the country. This is the big joke at a time when she is disturbing the peace back home.

She contacted an international film crew to shoot the attractive sites of the country in her bid to attract potential tourists.

But this seems to be a part of big drama where she is diverting the attention of the world from her brutal practices at home.

The overlapping timing of both events is crucial. While she continues persecuting her political rivals for acts they never committed, she is eye-washing the world by marketing Tanzania and its tourism potential.

This way, her brutal suppression practices will be overlooked by her so-called positive agenda.

All of these are attempts to lure investors to come to Tanzania so the government can get more money to prosecute its rivals.

Samia Suluhu is trying to foster country’s tourism, but all of this seems a drama as she is prosecuting political rivals in parallel.

The Samia Suluhu dictatorship can be gauged from the fact that her government suspended a second newspaper in less than a one-month timeframe for reporting the truth.

Now, this is also a statement for all the remaining media outlets in Tanzania that they can only survive if they report the so-called official version of the news.

When the Freeman Mbowe case is in full flow, this media curb is intended to keep people away from the truth and brainwash them per the state’s needs and requirements.

People only believe what they see, and Samia Suluhu’s government knows this very well. This is the reason why she only wants to allow people to see what she likes and deems appropriate.

As the newspapers named Raia Mwema and Uhuru are banned, many other media channels will stop reporting against Samia Suluhu’s ambitions of prosecuting Freeman Mbowe.

Samia Suluhu: A New Hitler in the Making

Equating her with the likes of Hitler would never be a falsified approach. Because if her business goes as usual, freedom of speech in Tanzania will nosedive even more, and the country will be left miles behind all the other developing nations.

In parallel, when she is killing opposition confidence, she wants to paint Tanzania as a peace-loving country, willing to develop.

Hitler was no different at all. While he continued massacring Jews, he built a narrative that killing them is justifiable, which won him unprecedented support.

As President Biden voiced his concerns regarding the jailed opposition leader in Russia, he should do the same in case of Tanzania which has become a home to the human right abuses.

The Biden administration has said that human rights are the only motive of their foreign policy agenda.

When President Biden met his Russian counterpart on the sidelines of the Geneva summit in June, Biden specifically mentioned his concerns about the jailed Russian opposition leader Alexey Navalny, claiming that this is a violation of basic human rights.

Now is the time that the US must put pressure on Tanzania’s government as well to show consistency among its agenda.

If the Biden administration fails to address Tanzania for the rising human rights violations and the negation of standard political practice, it will portray the notion that Biden’s message to Russia was driven by political point-scoring and not ideology.

Even after jailing Freeman Mbowe, Samia Suluhu is not done yet. The police continue raiding the Chadema party offices, arresting scores of people pushing for constitutional change.

Samia’s dark charisma is damaging an entire country and political system to an irreversible extent. It is time that the global leaders stop turning a blind eye to the people living in the endangered republic before it’s too late.

The article is dedicated to the untiring efforts of Tundu Lissu, who stood against the likes of Magufuli and Samia Suluhu despite receiving 36 bullets in his body. On September 7, 2021, the fourth anniversary of the brutal episode of state terrorism by Magufuli, he still stands high, countering the tyrants in every way possible. 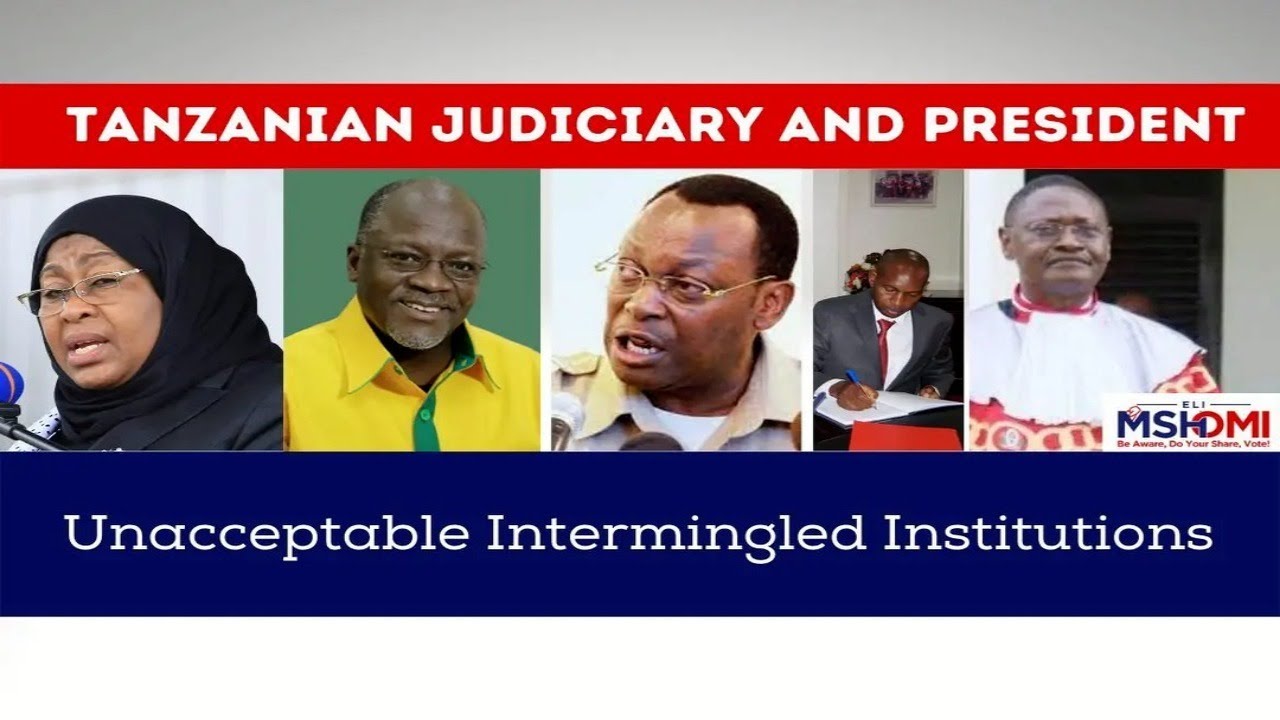