Amid the rising tensions for Biden to seek Republican support to pass his agenda through the Senate, Section 304 of the Budget Reconciliation Act 1974 has brought exciting news for Democrats.

As Republicans were trying to put roadblocks in the Democrats’ way, the interpretation of the section by the Senate Parliamentarian Elizabeth MacDonough will be win-win news for Democrats. This interpretation would be able to pass more bills this year with a mere 51 votes instead of 60, typically required to avoid a filibuster in the Senate.

We have gathered some Frequently Asked Questions (FAQs) about Section 304 of the Budget Reconciliation Act. Let’s have a look.

What does Section 304 of the Budget Reconciliation Act 1974 say?

The actual text of the section says,

How many budget reconciliations can a party do in one year?

Why were Democrats unable to find out this law before?

Probably, Democrats oversaw Section 304, mentioning the revision of the already passed budget reconciliation. The Senate parliamentarian Elizabeth MacDonough has advised that Democrats can use the reconciliation process even further, helping Democrats lose the burden on their shoulders.

How can Democrats use this budget reconciliation advantage that they just get?

As the name suggests, it can be used in budget proposals involving money. Contrary to popular belief, this reconciliation cannot be used to pass voting rights bills and gun control laws. So, Democrats must find other ways to pass their other plans not involving budgets.

As Democrats use this reconciliation once per year, where did they use it for 2020?

Due to the bill’s urgency, Democrats used their chance in passing the coronavirus American rescue plan worth $1.9 trillion, as the Republicans proposed a counter plan comprised of only one-third of the Democrats’ plan.

Where are Democrats expected to use their next reconciliation advantage that they just won?
Advertisement

As President Joe Biden announced an infrastructure plan worth more than $2 trillion, they are expected to use it in passing this. Republicans will never extend their support to this bill, owing to the differences they are having with the Democrats right now on the bill.

What are the differences between Republicans and Democrats on Biden’s infrastructure bill that drive the need for the budget reconciliation process?

As the bill is worth more than $2 trillion, Democrats believe that the money to sponsor the bill must come by taxing wealthy Americans. Compared to this approach, Republicans opine that no additional tax should be imposed, and the government must find alternate ways to sponsor the bill.

Two trillion dollars is no small amount, and it seems next to impossible to fund this much money without increasing taxing, especially in times when the government is already providing stimulus checks to the masses.

Apart from that, Republicans do not support Democrats’ plans beyond roads and bridges. As the Democrats proposed bill focuses on rejuvenating the infrastructure in the broader framework for which roads and bridges are just a small part, it is unlikely that both parties can reach a consensus on the said matter.

When are the Democrats expected to pass Biden’s infrastructure plan?

Despite the Senate parliamentarian ruling in their favor, Democrats have not yet decided the time when they are going to pass the legislation.

“No decisions have been made on a legislative path forward using Section 304, and some parameters still need to be worked out.”

Isn’t this type of sweeping process a danger to American democracy?

Democracy demands rigorous participation of the public representatives in legislative matters, and there is no doubt that the elected Senators must contribute to the legislation.

However, the Republicans’ approach to politicizing the matter often ends up screwing most of the bills for which Democrats are forced to take sweeping actions. At the end of the day, Democrats are utilizing Section 304 to benefit the general public. 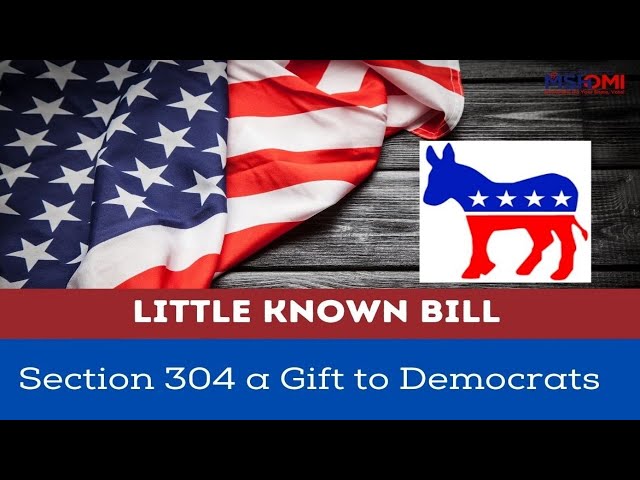 My Pillow Guy: FAQs about the jerk who...

Everything you should know about House systemic changer...

Everything you need to know about the current...