“We tend to forget that nobody is safe until everyone is safe.”

(Samia Suluhu in the United Nations)

While speaking this, she forgot that she had jailed the political leader of the largest opposition party in Tanzania, Freeman Mbowe.

Going by the same logic that she talked about in the UN, nobody is free until everyone is free, and Mbowe should be released as soon as possible if she truly wants to walk the talk outlined in her maiden UN speech.

Samia Suluhu UN speech was the plethora of lies thrown again and again from the floor of the United Nations.

Amid these times when diplomats and leaders worldwide gathered together to discuss matters of common interests, Tanzania President Samia Suluhu found an easy way to manipulate global leaders’ minds through her baseless rhetoric, false narrative, and big lies.

Samia UN speech was navigated around lying and concealing the true conditions of bleak human rights at home.

The United Nations has already turned a blind eye against the Republic of Tanzania as the successive governments successfully manipulated the mind of United Nations Secretary-General Antonio Guterres, who gave tribute to John Magufuli after his demise,

Addressing the UN after Magufuli’s death, he said,

“We recognize the service of President Magufuli. He sought to expand access to social services and tackle corruption.”

The UN Secretary-General is blindfolded in extending his support to a dangerous regime s characterized by corruption itself.

When John Magufuli died, Guterres addressed the UN saying the above words and wished his successor, Samia Suluhu, the best of luck.

This sort of ignorance by the head of the biggest intergovernmental organization of the world is dangerous not only for the people of the Republic of Tanzania but also for the very ambitions of the UN to promote its charter for peace in the world.

Now the same UN Secretary-General must fact-check Samia’s lies, or he will continue believing the lies of the oppressing president.

Samia Suluhu tried to beat around the bush in her maiden speech in the UN. She intentionally avoided the extremely crucial part of the United Nations theme about the UNGA session. The UN official theme stated,

“Building resilience through hope – to recover from COVID-19, rebuild sustainability, respond to the needs of the planet, respect the rights of people, and revitalize the United Nations.”

Samia Suluhu disrespected the theme and avoided the part mentioning “respect the rights of people” in its entirety.

She had nothing to say on this subject, seeing that she is jailing the political opposition leaders and their supporters in significant numbers.

Her hypocrisy is exposed, as she only talked about the portion that could eyewash the world and hide the things from them that could unveil her brutal agenda.

The global community must take notice of her dire ignorance in disrespecting the rights of people, hence going absolutely against the theme of the United Nations.

While talking to the global leaders, she said,

“Aware of the nexus between economic growth and governance, we managed to maintain peace and political stability, with a vibrant democracy and institutionalized good governance practices, upholding rules of law and human rights.”

Give Me a Break, Samia: Tanzania Has Nothing to Do with Political Stability:

Samia’s above-mentioned statement was a blatant lie and an insult directed toward both the United Nations and the country of Tanzania.

The claim of promoting political stability does not sound valid from the mouth of Samia Suluhu. Oppressing the opposition political parties and not giving them an option to canvass outside the election season is the absolute negation of political rights.

Tanzanian forces under the direction of Samia are harassing political leaders, including Freeman Mbowe, and arresting activists and anyone demanding a new constitution.

This simply does not result in political stability at all. Samia’s words and her actions back home do not add up to form a consistent message.

UNGA speech and failed to discuss the matters that are severely deteriorating Tanzania’s reputation worldwide.

Respecting the rights of people was explicitly mentioned in the official theme given by the UN ahead of the annual gathering.

However, she hesitated to discuss the matter of deteriorating human rights conditions in Tanzania at the global forum, as she did not have enough material to substantiate her flawed beliefs of human rights. She just touched the matter in one word and avoided going into much-needed details.

For her, human rights are to serve the people who can propagate her interests in the country while abusing those who try to talk sense and have register dissension.

No constitution in the world is a divine book that cannot be changed at all. Demanding a constitutional change is a sign of a progressive nation, which tries to adapt itself to the changing needs of the time.

Hence the abuse towards Freeman Mbowe should be stopped as per the official theme of the UN’s 76th session.

The misery of Samia Suluhu does not end here. Even after the arrest of Freeman Mbowe, her efforts to deny him the fundamental human right of a free and fair trial by his peers manifest her dangerous vision for the Republic of Tanzania.

By conspiring with the judiciary, she wants the outcome of her own choice from the pens of the custodians of justice.

This is surely a denial of justice, seen through any prism present in the world right now. No country in its constitution denies its citizens this right to free trial, and it is considered as one of the most fundamental rights of human beings.

Political leaders are not the only ones facing the brunt of Samia Suluhu right now in Tanzania.

Activists and civil society are also facing a manhunt organized by the authoritarian regime of Tanzania today, as the government continues hunting the general public supporting the main opposition political party, Chadema.

The judiciary in Tanzania is not the only institution plagued by the ruling CCM party. In fact, the police forces are also exceeding the authority given to them by the law.

Police General Orders (PGO) are considered to be the textbook of police administration in Tanzania.

However, the police officers often trespass and abuse civilian liberties in one form or another in this lawless country, without any fear of being caught or punished. Some of the criminal activities performed by police daily include:

The lawless country of Tanzania, under the ruling CCM, has crossed great lengths to defy even the already existing constitution.

It is not that Tanzania’s status quo is against only the enactment of a new constitution. They are defying even the existing constitution as well.

But the current book helps them find the loopholes in the system every time a powerful person commits a crime. The existing constitution sets the president as the absolute authority while defying the organizational hierarchy. And this is what Samia Suluhu wants.

With a new constitution, these loopholes would be closed and expose a danger that could stop Samia Suluhu and her successors from abusing authority.

Hence, when Samia Suluhu talked about the rule of law in her country, she should have seen that the police of the same country are hunting the ruling party’s political rivals for arrest.

(President Biden in his UNGA Address)

Amid these leaders were absolute authoritative figures like Samia Suluhu. This statement from Biden should be considered as a fair warning to Suluhu, who is still embracing the doctrine of suffocating their people instead of giving them a free hand to promote democracy in the country.

The enactment of this doctrine by Samia Suluhu is exclusively depicted in her efforts to sabotage the new constitution demands in the country right now.

Anyone supporting a new constitution in Tanzania is in absolute danger these days of being jailed for the crimes they never committed.

The same happened with Freeman Mbowe, as he is being tried on terrorism charges for demanding the new constitution.

If these demands qualify politicians for jail terms, this surely does not depict any state of democracy but the worst form of authoritarianism.

President Biden should evaluate Tanzania in the light of his statement to the UN and bring the brutal regime to justice as soon as possible.

Both President Biden and the United Nations are advocates of freedom of expression and human rights, at least in theory.

But they are unable to sanction Samia’s government, even after seeing the country nosediving in the free practices.

For instance, Tanzania scored only 12/40 in political rights and 22/60 in civil liberties, as per the organization’s 2021 data.

The overall freedom score of the country is even more worrisome, as the country scored a mere 34/100 as per the latest data. This was a decline even from John Magufuli’s tenure when Tanzania scored 40/100 last year when he was ruling the country.

The rule of law is still a pipe dream in Tanzania, where the judiciary is heavily manipulated in favor of the ruling party. This was depicted in the Freedom House report as well, which mentioned,

“Judges are political appointees, and the judiciary does not have an independent budget, which makes it vulnerable to political pressure.”

The case against Freeman Mbowe is an epitome of this doctrine, which demands immediate revision in the new constitution as soon as possible.

Samia Suluhu tried to eyewash the world through her speech in the United Nations. However, her lies are crystal clear, which will soon lead her into trouble.

Her hypocrisy is exposed as she ditched the official theme of the speeches and skipped the all-important part related to human rights.

Her claim that Tanzania is a politically stable and democratic country can only be revitalized if she can successfully manage to bring justice in the case of Freeman Mbowe without influencing judicial management. 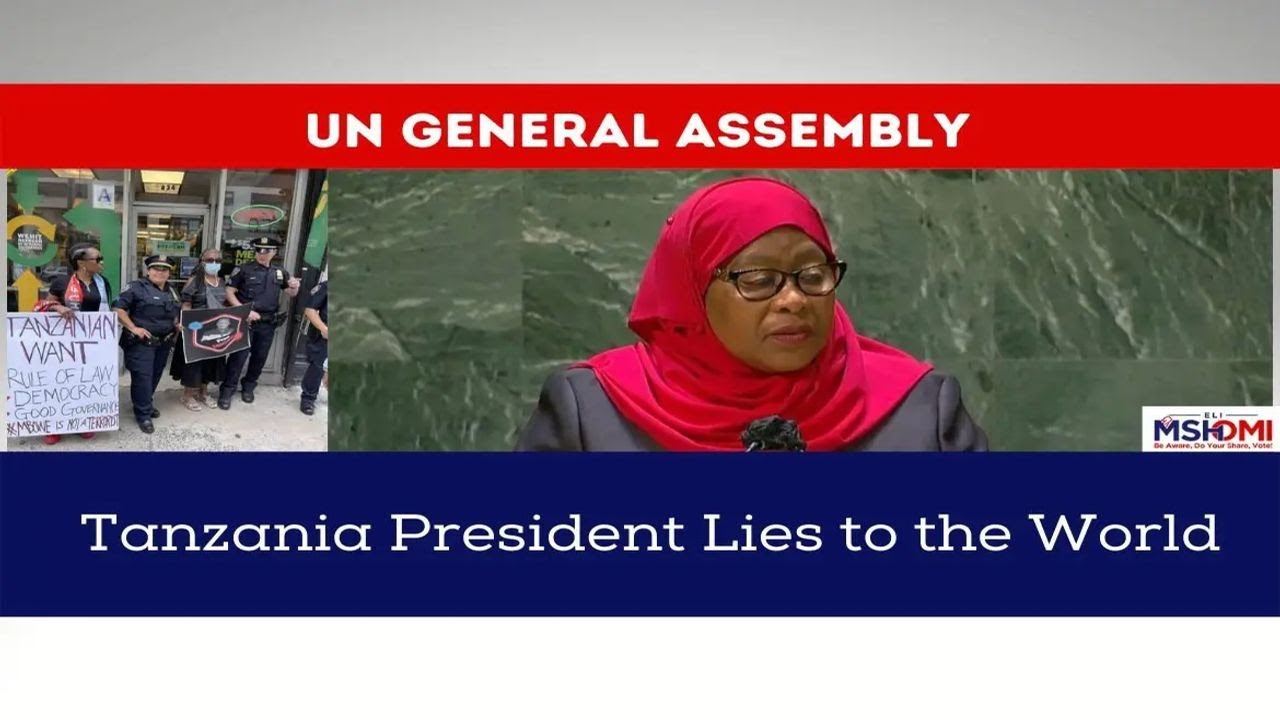 Canceling France in the Indo-Pacific Region: The US is Committing a Blunder

China Launches Hypersonic Missile: US Sovereignty is in...

Iran-Azerbaijan Imminent War: The Military Build Up in...