John Magufuli Down: It’s Tanzanians Turn to Pay Back his Hardcore Advocates

The John Magufuli saga has not reached a conclusive end yet. Despite his unexpected demise amid the rising criticism of his regime, John Magufuli’s memories are cursing the people who supported him during his tenure.

This time, Tanzanian musician Diamond Platnumz is in hot water for his uncompromised support of the late John Magufuli and his former Regional Commissioner, Paul Makonda, of Dar es Salaam.

Diamond was nominated in the Best International Act category, alongside Nigeria’s Burna Boy, in the BET Awards 2021, and Tanzanians want to get his nomination canceled.

A petition has been launched against the singer Diamond Platnumz to disqualify him from an American Award show, the BET show, for supporting human rights violations.

How did he endorse John Magufuli and his right-hand man Paul Makonda while supporting their human rights designs? Let’s see.

Diamond Platnumz and John Magufuli: The uncompromised support of the former to the later is responsible to the ongoing criticism against Diamond.

While his fellow artists were in trouble from the hegemonic regime of John Magufuli, Diamond remained silent, which raised many eyebrows about his potential involvement in the persecution.

Platnumz nominated Paul Makonda to be the patron of his media company, Wasafi. Makonda, in turn, used the platform to promote his own narrative.

At a time when the political repression reached its peak in Tanzania, and many of the artists were imprisoned, Diamond’s words mattered a lot.

As the pressure grew upon him, he deliberately released a single called Acha Nikae Kimya, meaning “Let me remain quiet.” This release of his portrayed his ambitions that he is all set to back Magufuli’s repressive regime.

John Magufuli with his hardcore supporter Diamond Platnumz. Now Diamond has to pay the price for supporting Magufuli

John Magufuli was a dictator who set Tanzania on a whole new path. The atrocities committed during his tenure are countless and were present in almost all the avenues of social life.

The enforced disappearances increased manifold when Magifuli ascended to power. He shaped the media in a way to portray the state narrative instead of the freedom of expression. As he shut down a score of newspapers and suppressed the voice of the electronic media, the repression started to be normalized in society.

During his reelection, the atrocities went to another height. The political opponents were at the receiving end of these brutalities.

The primary opposition politician, Tundu Lissue, survived an assassination attempt and went into exile due to the oppressive treatment.

Even when he came back to contest for the 2020 elections, he received death threats, forcing him back into exile.

Magufuli undermined any other nation that spoke badly of him and tried to isolate Tanzania at every possible level.

Those who tried to create awareness against his COVID policies were treated badly. The young girls were not allowed to continue their education in the case of pregnancy.

This regime of censorship was so severe that the critics started disappearing themselves, seeing the brutal treatment against their colleagues.

Even the artists were not safe from him, as his administration arrested them en masse. Seeing all of this, the endorsement of Diamond Platnumz was surely questionable.

As many other corrupt practices emerge with the negation of human rights, this was also the case in Tanzania.

With Magufuli’s regime, corruption started skyrocketing in the government infrastructure. This helped Sabaya to steal his part from the Tanzanian economy.

Sabaya covering his face as he appeared in Arusha court. Photo Credit: The Citizen

He was appointed as Hai District Commissioner by John Magifuli, but he misused his powers and extended Magufuli’s vision of unnecessary arrests and torture.

Now, President Samia has suspended him as a commissioner, and inquiries have been started against him on various counts. This includes corruption, robbery, economic sabotage, leading a gang, and money laundering.

Samia Suluhu has also given a clear signal that those who were enjoying safe harbors in Tanzania due to Magufuli’s fascist tenure are no longer safe in the country anymore. This can kick off a new era of holding the powerful accountable in Tanzania.

Paul Makonda, who was supported by Diamond Paltnumz, was also a frontline advocate of Magufuli’s narrative. He was involved in gross violations of human rights in Tanzania as well as suppressing the voices of the opposition. He endorsed the ideology of negation to freedom of speech as well.

All of these practices qualified him for being the righthand man of John Magufuli, for which he is facing the consequences now.

BET Founder Robert Johnson who wanted BLM t form its own political party. Now, its upon him that how does he deal with the ongoing Diamond issue.

The BET’s founder, Robert Johnson, has a history of supporting BLM protests. He even advised BLM to form its own political party to safeguard the interests of the Black community. Now it is time for him to walk the talk by supporting Tanzania’s cause.

The roots of racial discrimination against Black people are found in these authoritarian rules. When we talk about the lesser job opportunities for African Americans, their exposure to the issues like gentrification, their brutal police treatment, and suppression of their voting rights in the USA, these things are initiated from the countries like Tanzania.

White supremacists may believe that African people are not even treated fairly in their own country, so they deserve poor treatment in the US as well. This is one of the reasons why African countries are belittled by many. In the long run, if we want equal treatment for all, the issue needs to be addressed from the genesis where the brutal regimes of Magufuli must not be endorsed at any cost by the western nations.

If BET disenfranchises Diamond Platnumz from the awards, they will play their part in portraying the message that cruelty against Blacks is not tolerated at any level, and the artists supporting it would be treated in the same fashion.

As a Black entertainment forum, BET needs to understand its responsibility to be the frontline advocate of Black rights.

If they make a statement by expelling Diamond Platnumz at this stage, they will portray the real sentiments of the Black community; that those who endorse Black suppression do not deserve to be a part of the community, even if they are Black themselves.

If BET fails to do this, they will normalize Black oppression not only in the United States but also in the African countries as well.

Even after the demise of John Magufuli, Plantnumz did not dare to comment against his brutal designs of human rights.

The problem with Diamond Platnumz was that he was not a quiet spectator only. For instance, he could have justified his actions had he remained silent in all the episodes. On the contrary, he endorsed the ideas of Magufuli, playing his part in the persecution of the oppressed ones.

He dedicated a song in favor of Magufuli’s support, named Magufuli Baba Lao. Not only this, but he also spoke in favor of the late president while on stage many times.

The extent of hypocrisy was so intense that he preferred to comment on the social movement of Nigeria at the same time when the 2020 elections were taking place in Tanzania, and the brutal repression was in full flow in Tanzania as well. While he tweeted for “EndSARS” to protest against the Nigeria police, he failed to utter a single word against Tanzania’s brutality.

Diamond Platnumz did not speak for Tanzanians’ rights when they needed him. Now its Tanzanians turn to pay him back by raising voices against him.

Magufuli Down: Tanzania’s Turn to Pay Diamond Back

The same Tanzanians who so-called “elected” Magufuli for the second consecutive term have now launched the petition against Diamond Platnumz.

This has a loud message for those who want to hear. It portrays the irregularities in the Tanzanian elections as well. Tanzanians who were not in a position to speak against the atrocities committed at that time are becoming vocal now against the erstwhile oppressive regime.

Diamond Platnumz is not the only one cursed by John Magufuli’s remains. Paul Makonda has also been banned from entering the United States for his regressive human rights designs.

The level of human rights violations can be gauged from the fact that Paul Makonda was banned from the United States even during Trump’s fascist regime.

Not only this, but the former Hai District Commissioner Lengai Ole Sabaya has also been arraigned for his alleged corruption activities, which shows Samia Suluhu’s government’s commitment to bring people to accountability.

No doubt that a nomination from a Tanzania artist was a thing to celebrate from the people, but Tanzanians have shown that those who stood for oppression do not deserve to represent the country on the international stage.

By not going against hegemonic Magufuli’s doctrine, Diamond Platnumz tried to expand his business interests while compromising the freedom of Tanzanians. Now it’s Tanzanians’ time to pay back  Platnumz.

It is high time that BET itself fact-checks the credibility of the estranged singer and kicks him out of the nomination.

Human Rights advocation is the need of the hour in most of the African countries, where lack of democracy often overlooks the basic needs of people.

Now, when Tanzanians have become the whistleblower against an oppressive singer, the responsibility lies on the shoulders of BET that they investigate the matter with the full flow so that such a dignified award must not go to a singer who supported killings and forced disappearances. 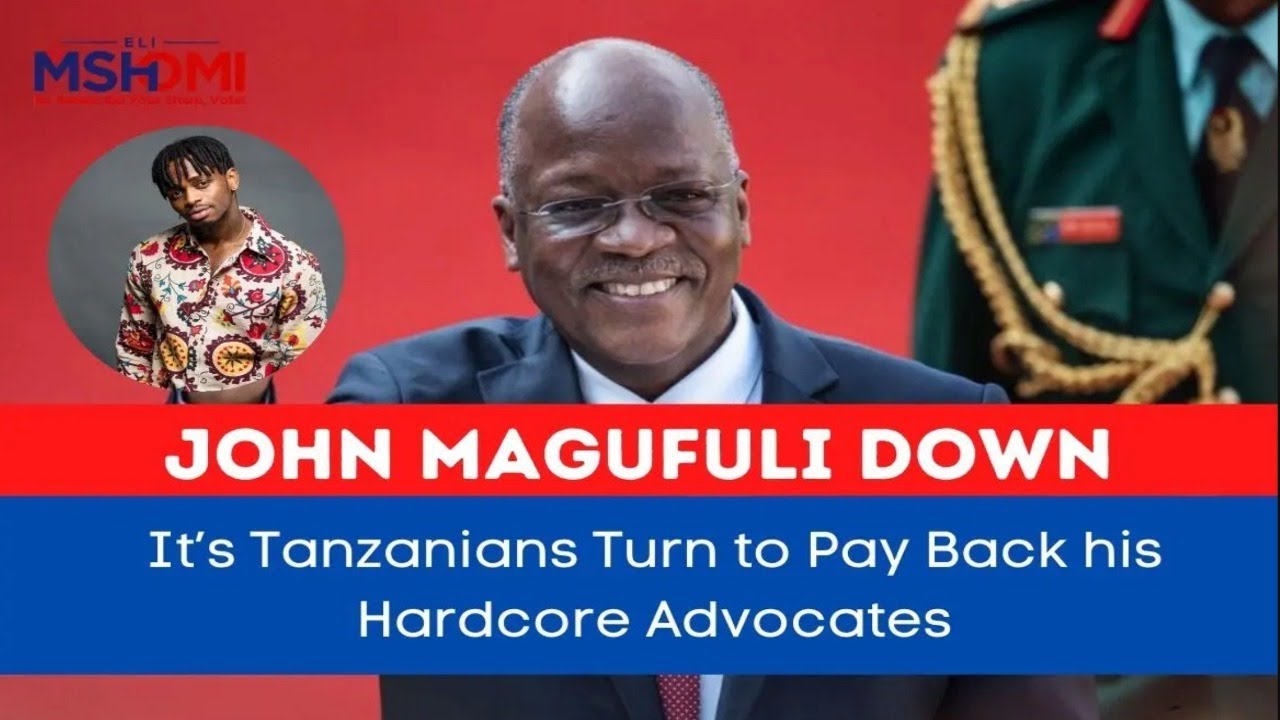 White Gaze: Blacks are Strangled, Give Me a Break

Israeli PM Netanyahu in Trouble: Biden has an...

Raining Death on Innocent Palestinians: the US Must...

COVAX: WHO Vaccination Initiative in Jeopardy as India...