US Forces Left Bargam Airbase: The Beginning of the New War in Afghanistan

Bargam airbase was the epicenter of the United States operational activities against the Afghan Taliban and Al Qaeda insurgents.

As the US handed over the airbase to the Afghan National Defense and Security forces, it is an indication by the US that no more operations would be carried out against insurgents by US forces.

The Taliban have hastened their assaults in Afghanistan, capturing new districts in the country post-US withdrawal from the Bargram airbase.

This time they are eyeing a bigger target. For the first time in recent memory, they have launched an insurgency in the provincial capital, promoting prisoners to flee and civilian exodus from the region.

Qala-e-Naw, the capital of Badghis, is under attack by the Taliban while the government forces have no clue how to respond.

This is a fair warning for the rest of the country, where the Taliban’s assault is only a matter of time. More than one thousand Afghan forces have also moved to Tajikistan amid the uncertain future, leaving the country in further doldrums.

As the Taliban and the Afghan government go to another round of talks in Iran, while the world waits for a written peace plan from the Taliban next month, eternal peace remains a pipe dream.

However, the United States continued its pursuit to get airbases outside Afghanistan to attack the Taliban whenever necessary.

The Taliban has vehemently warned the countries considering giving their bases to the United States, creating a sense of confusion among the major stakeholders to take sides in the upcoming conflict.

Leaving of Bargam Airbase: The Beginning of the End

As the United States comes nears to celebrate its independence day on July 4, the NATO forces are also leaving Afghanistan. The European forces have already left the graveyard of empires unceremoniously, leaving America’s “forever war.”

The emptying of the Bagram airbase has sparked signs of hope in the Taliban, who admired the decision taken by the US.

However, with this withdrawal comes the real danger of civil war. The recent events in the troubled territory have empowered the Taliban enough to capture power in no time.

More than 70 percent of the Afghan territory has either been directly controlled by the Taliban or contested between the government and the insurgents.

The failure of diplomacy in the last three years has fostered a crisis that is inevitable in the upcoming times.

Despite getting rigorous training from the United States, the Afghan forces have no capacity to defend the country. On the other hand, the Taliban are being funded by various regional powers.

Read More: The US is trying for a quick fix in Afghanistan

Meanwhile, the concerns of human rights violations remain high in the region.

Almost 18,000 Afghans who helped the US forces, in one way or another, are at extreme risk of violence immediately after US troops withdraw.

The Taliban can walk the dangerous path to take revenge on this group of people. Seeing this, the US House of Representatives has already passed the HOPE for Afghan SIVS Act for speeding up the immigration process for this group of people. However, as long as they face visas delays, the threat of violence remains high against them.

The second most vulnerable section is women. Many girls’ schools are likely to be closed in the country soon. Previously, when the Taliban rose to power in the country in the late 1990s, girls’ education was completely banned all over the country.

Over the subsequent years, the access to education even to the elitist girls of the country remains bleak. In May 2021, a terrorist attack outside a school killed more than a hundred students, most of them girls, signifying the resistance which the Taliban shows against education. The threat remains the same even today.

With the US withdrawal, the hope for children is diminished, and the insurgents are in full authority once again.

The Taliban now is entirely different than the Taliban of 2001, when the United States invaded Afghanistan.

Today, innumerable factions within the Taliban have emerged, endangering the future peace process.

The rise of the Islamic State within the Taliban ranks is a classic example in this regard. Just when the US leaves the country, a power tussle between different warring factions of the Taliban would become imminent.

Even though the United States has made a deal with the Afghan Taliban not to use the Afghan territory for attacks against the US, other factions within the Taliban can do this easily.

All PostsFor some the US withdrawal from Bargam airbase is a welcome move, for others, it’s a beginning of a new mess.

As Afghan President Ashraf Ghani and veteran politician Abdullah Abdullah met President Biden to discuss the post-US-withdrawal strategy, a political uprise is a matter of time in Afghanistan.

The only long-term solution to the crisis was an all-inclusive government, with both the elected leadership and Taliban occupying a predetermined number of key positions.

However, the US withdrawal from Afghanistan without settling scores is undeniably not the best choice. The responsibility would lie on Biden’s foreign policy team to continue aiding the troubled human beings without letting the money go into the hands of the Taliban.

The post-withdrawal strategy of the US would only be disclosed after the expulsion of the last soldier, but the region would not let the US administration breathe easily. 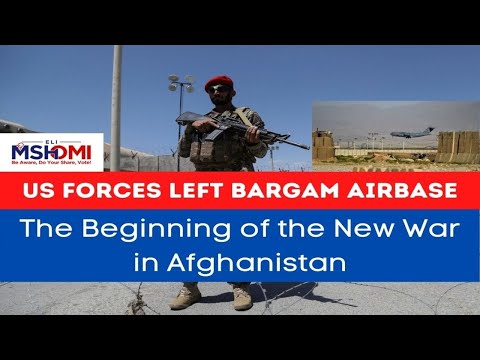